I was also convinced by the reason they only displayed the black collection. To tell the truth, I had jumped to the conclusion that BRIEFING was trying to follow the examples set by TUMI or Ralph Lauren. TUMI had been recognized worldwide as the new standard brand for travel and business bags, going under the “black-on-black” concept, using black ballistic nylon and parts. Ralph Lauren had also been immensely successful with his black collection of “Polo Luggage,” which he had fallen in love with and had specially ordered ANDIAMO to make them as an OEM. 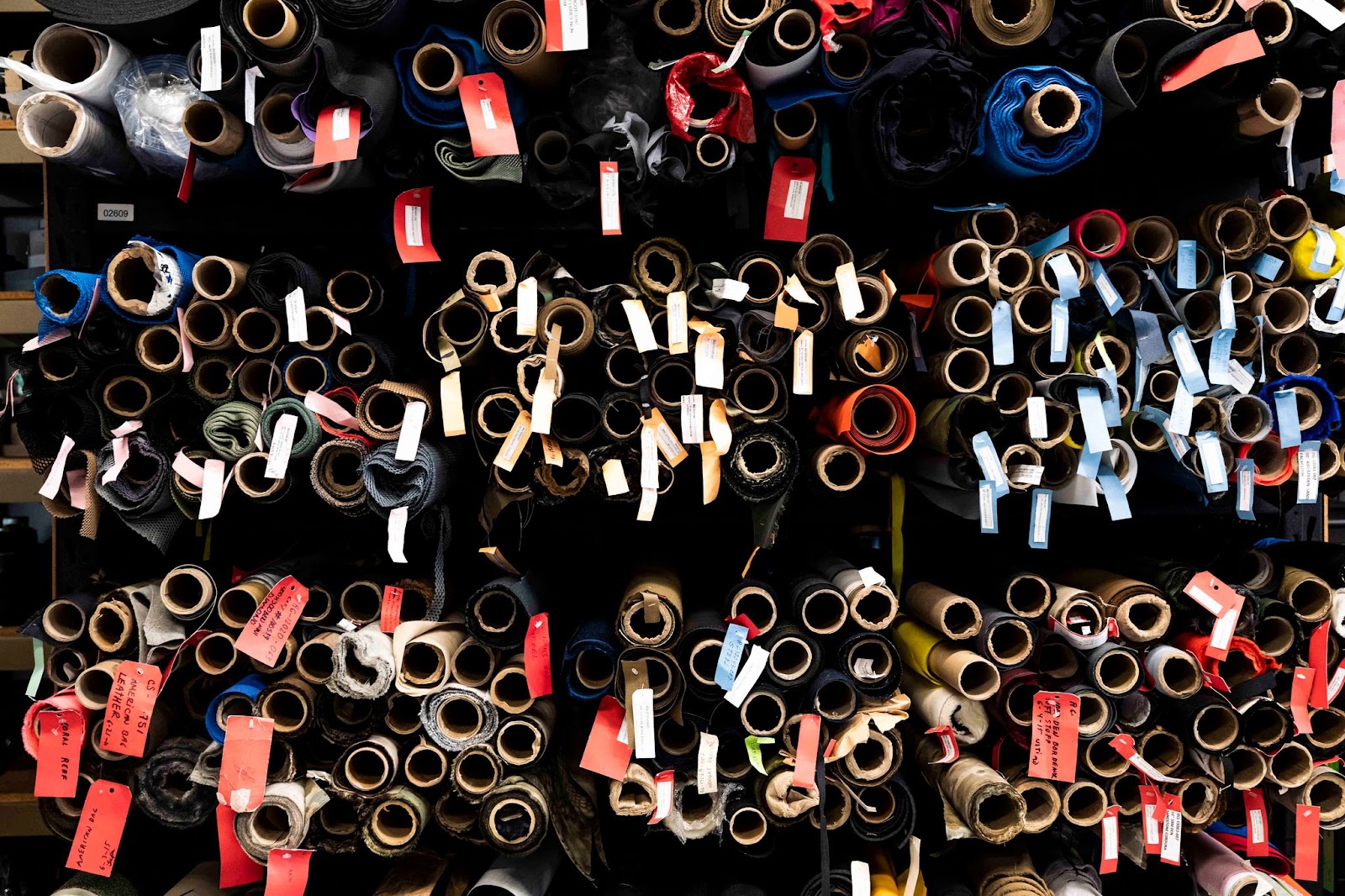 The truth, however, was much simpler. Unlike the black ballistic nylon and tapes that military factory had in their inventory, SELLTS LIMITED had to supply dyeing lots of quite some length to the textiles factory in order to secure the desired khaki and camouflage materials; but the order quantity would have been impossible to sell given the quantity of samples and the number of stores they had back then. As a consequence, SELLTS LIMITED reluctantly had to give up producing the khaki collection.

Now, let's look at the history behind the development of BRIEFING. Before writing this column, I had a chance to interview Shinshu Kosuzume, the designer involved ever since the brand launch, about the secret behind the birth of BRIEFING. His answer was unexpected. I automatically thought he would tell me that the concept of militarism was there to begin with, and then a difficult period followed before they found a military bag factory to work with. What he told me, however, was that the militarism concept only developed after they found military factory, the first factory that collaborated with SELLTS LIMITED.

It all started with WRAPS launched by SELLTS LIMITED in 1997. Back then Mr. Nakagawa had a dream of launching an original brand made by a competent factory in the US, but he didn't have any connections or anyone in mind who'd be able to help. It was a time when US companies had begun to relocate their production bases overseas, so we wondered if there were any American factories that would accept such a small-lot order from a tiny Japanese company. Mr. Nakagawa's dream came true when WRAPS was launched, the first original label belonging to SELLTS LIMITED. Material procurement and sewing were all done at the US factory. The success with WRAPS opened up an opportunity for the birth of BRIEFING. WRAPS, produced by SELLTS LIMITED, became an explosive hit in the late 90's, but Nakagawa was still planning to establish another made-in-the-USA brand.

If we manufacture in the US, it won't make sense unless we work with a factory which has American characteristics. After the WRAPS project had succeeded in spreading outdoor products for use in the city, we thought the next thing might be military products. I was thinking about manufacturing luggage at a military factory, designed for regular use. It was at this point that someone introduced me to military factory, the largest military bag factory at the time, enjoying the utmost trust of the US government. They showed me some samples of their work, and I thought we would be able to work together to make the military-design luggage we had in mind. This is how we started. 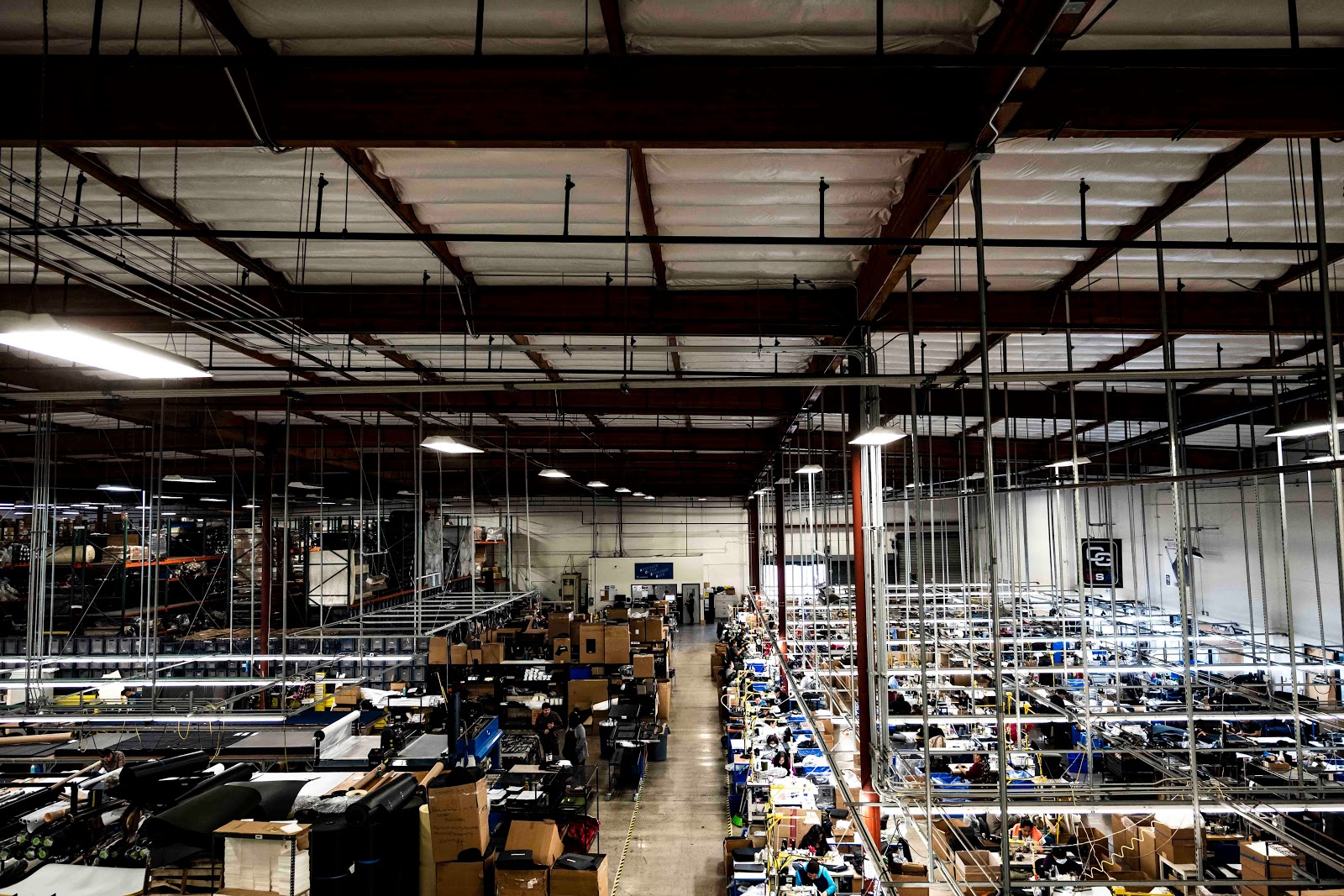 No matter how many times SELLTS LIMITED tried to contact them, it was like beating the air. Nothing would ever be settled if things continued that way. SELLTS LIMITED had to show them what it could really do as words and good faith weren't enough. After three rounds of negotiation, Nakagawa decided to purchase military factory' inventory of fabric and accessories and make product samples in Japan.

SELLTS LIMITED had always sought the functionality and practicality of a tool in their bag design, rather than stylishness. This turned out to their advantage when working with military factory, because Eagle's focus was to make simple and sturdy military bags to help win the war. Studying some of military factory' military bags, SELLTS LIMITED completed their first sample bag after a tremendous amount of labor. It applied new ways of using fabrics and accessories and a unique way of interpreting the Red Line. In this moment the bag was born, a new type of tote bag with an added modern twist, and totally new to the world of real military bags. Though military factory paid little, if any attention to the proposals and design drawings submitted by SELLTS LIMITED, the uniqueness and high-level of perfection of the sample bag for use in the city, which made maximum use of military factory” special technologies, completely changed their attitude. And not only that: they offered to make a substantial concession on the strict conditions initially proposed, including the number of lots and various other conditions. It truly was a memorable moment the day that military factory recognized SELLTS LIMITED as an important business partner.

There is another reason for the successful establishment of the partnership between Military Factory and SELLTS LIMITED. I was told that John Carver, the owner of Military Factory at that time, used to say: “Our business depends on military demand. But I would like to achieve a 50-50 balance in business deals with the government sector and the private sector. I want to make use of the skills and technologies we've developed in the military business, to make something that will help people, rather than something that might harm them.” This wish supplied a nice tailwind for the birth of BRIEFING.

In 1998, the BRIEFING brand was finally launched, introducing the original four models; the briefcase, the waist bag, the tote bag and pouches. It was at this moment when BRIEFING, a made-in-the-USA bag brand, was born under the banner of Japan-designed militarism - or more precisely, it should be called “urban militarism” or “town militarism” as it's of a type developed for use in the city. After a rough start due to the aftermath of the 9.11 attacks, everything went smoothly after production resumed. Bearing in mind that production was practically suspended for 2 years, the collection rapidly expanded to 190 models within just 13 years. 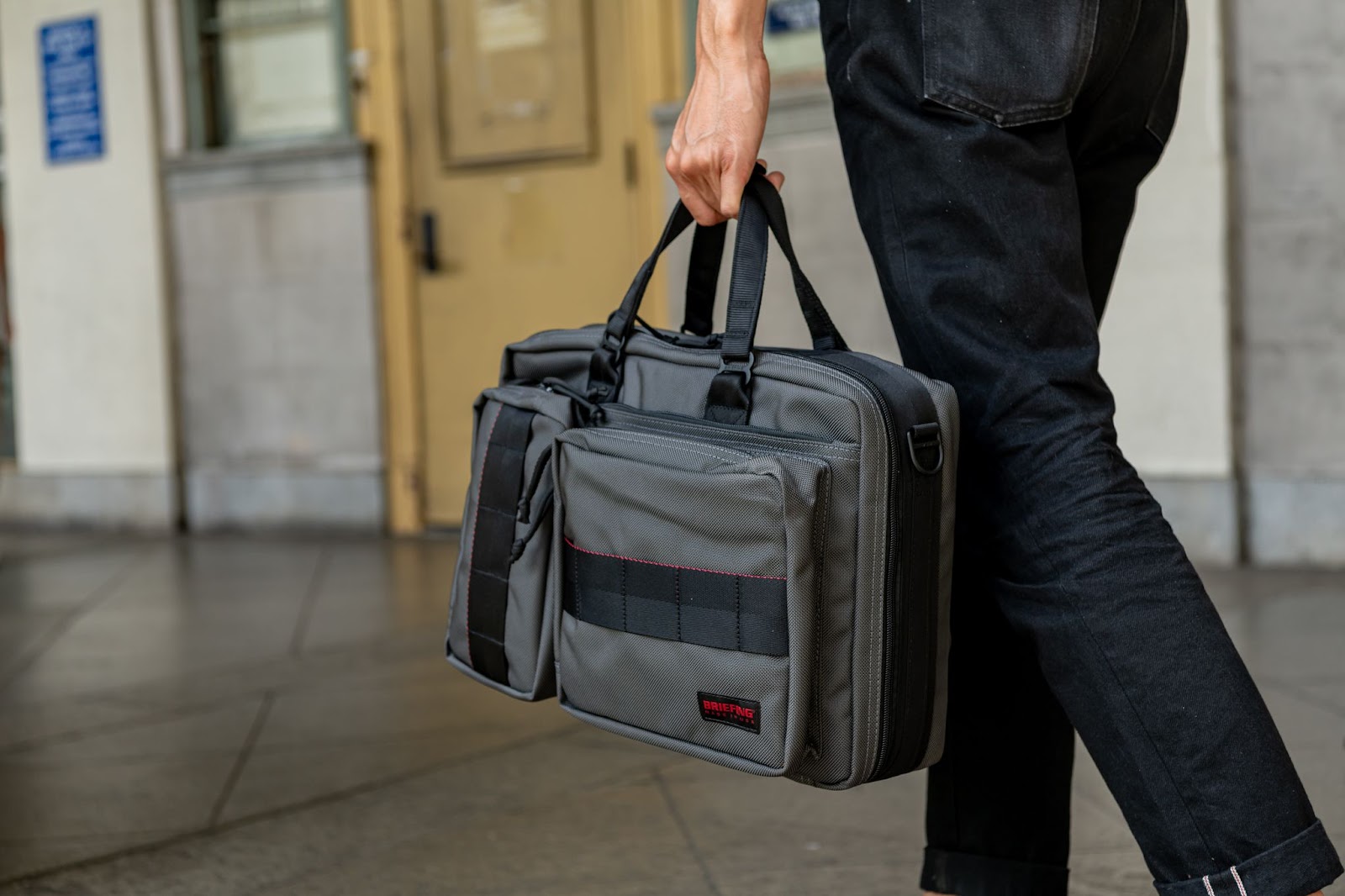 In addition to the main Red Line collection, BRIEFING became more focused on business demand, proposing more variations for each series such as the more luxurious “Black Line”, “Flight Light,” “Fusion,” and “Skin.” Recently, they also added a few hobby-related items such as golf bags and fishing rod bags. To add to BRIEFING'S appeal, there are now a number of special models including custom-made ones in multi-brand shops as well as limited models based on collaboration with media companies. All these models represent the popularity of the BRIEFING brand. For the past 3 years, BRIEFING has also been actively collaborating with various brands in other industries, such as RIMOWA, the movie “Resident Evil,” and New Balance. 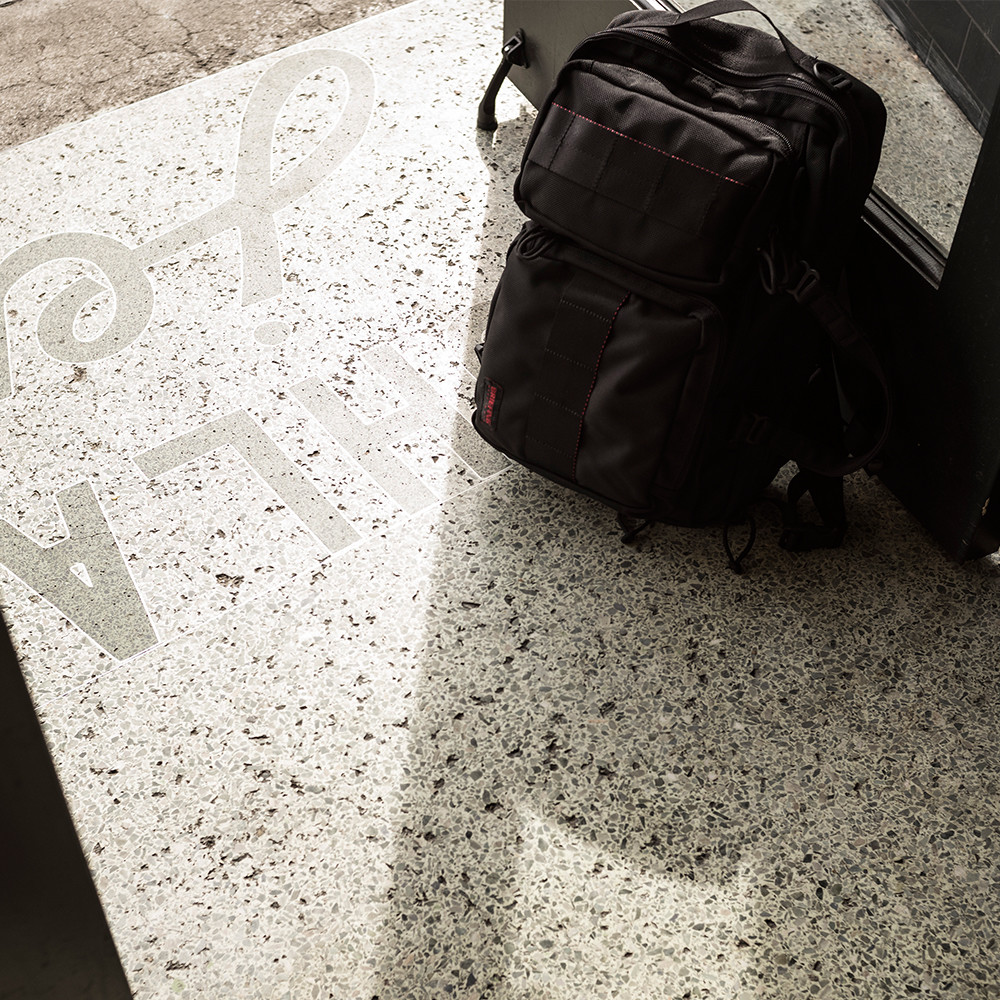 Now, let me tell you an interesting story. What BRIEFING wants to communicate by the term “militarism” is not just an image, but also the sturdiness, durability and practicality BRIEFING bags have, which are made to endure the rigors of the battlefield. However, several complaints were made by Japanese users that the fabric wore away or the metal parts broke, so these were sent back to the US factory for repair. Factory workers were shocked after inspecting the bag, saying: “We've never received a repair order like this.

How is it possible to break a bag like this?” They investigated the cause, but found no defective parts. In conclusion they decided that the commuting and working conditions of Japanese businessmen were harder than those encountered on the battlefield. They made several changes to the specifications and these problems disappeared; and somehow, it means that BRIEFING has obtained a sturdiness and durability that exceed the real military specs.